Drones are the in thing these days, it’s become a fad to own camera drones to shoot aerial shots and put it up for public viewing.

Here, we present UDI U818A Review in an unbiased manner, which will help you assess whether this product suits your requirement.

The camera in UDI 818A HD+ RC Quadcopter uses 2 MP with upgraded 4 GB Micro SD card; this enables the drone camera to take high resolution pictures. Not only this, the pictures and videos taken during flight are stable and of good resolution.

The stability and strong wind resistance comes with the 6 axis gyro stability feature inbuilt in the camera. This feature also enables manoeuvrability for stunts.

The UDI U818A is customisable, there are a host of do-it-yourself UDI U818A mods available on the internet which will help you modify certain aspects. Modifications are often done to make the drone camera fly for lighter, faster and longer range.

UDI Drone Company is a name to reckon in this industry and it’s latest UDI U 818A is a great product. There are some negatives attached to this product, here is a quick glance at them –

Battery life – Although the charging of the battery is decent, the life of the battery is short. It seems to die pretty fast. There is a spare battery and powerbank provided as part of the kit. However, amidst a beautiful aerial shot, it is frustrating when the battery dies and you are required to replace it.

The full charge flight time is 7-9 minutes, which is lower than many other drone cameras on offer.

Lacks GPS – This is a major drawback in this model, most competitors have inbuilt GPS system to enable tracking the drone camera when it gets out of sight due to smog, smoke etc., Although there is a button to bring the device back home, the lack of GPS is disappointing.

Issues with motor: many users have found situations where the motor fails. This could be manufacturer error or due to usage. There have been instances reported where motors have completely died or burnt up, this could clearly be a problem at the manufacturer’s end.

Costly spare parts – The replacement cost of the spares of UDI U818A seems to be very expensive. The UDI U818A parts are of good quality and hence, cost more. The parts has to be sourced from genuine retailers, else, it may not be compatible with the device. 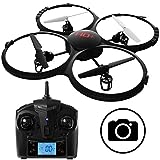 Camera shots: UDI U818A HD camera is the top feature of this product, the flight performance is quite decent. The camera shots have high resolution and stability. The 6 axis gyro sensors ensure that the adjustments are improvised to continue getting better view of the target.

Impressive flight performance: This is a great entry level quadcopter, it’s extremely easy to fly. It offers stability even when the wind is blowing at 10mph. The quadcoptor is lightweight and can perform stunts including the 360° inversion flip.
A higher altitude is a must before you try such stunts and experience operating the model is required. You can use the drone indoors and outdoors as required, thus making it a good device for practice.

Pricing : UDI U818A reviews indicate that this is reasonably priced and within the reach of many rookie drone pilots. It offers many functions which are found in high-end drones. The UDI 818A parts are of high quality, given these aspects it is a real value for money gadget.

Durability: The product is built for durability; beginners are likely to crash land the device often. Low cost drones could get severely damaged in such scenarios. However, UDI U818A reviews suggest that this product manages to sustain few crash landings alongside strong wind.

Good remote control: The remote control of this quadcopter is very impressive. It has a nice look and feel compared to some of the competitor’s remote controls which are toy like. It feels natural in an adult sized hand. There is also an LCD monitor with FPV capabilities.

This full udi u818a review gives us a fair idea of the product. This gadget is best suited for beginners and novice drone pilots. It is reasonably priced; hence one need not spend a fortune while still in the learning phase. It is pretty durable and hence, will withstand crash landings which are inevitable in the learning stage.

Overall, it seems like a good product for a beginner and for those who want to own a quadcopter without spending too much!